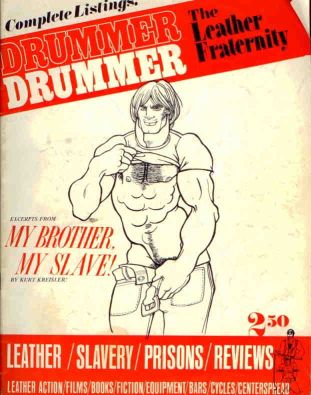 The magazine was one of the first publications to print material centered around leather and gay masculinity. The images the magazine published were counter to the historically disempowered gay male, the “sissy.” Drummer published images of masculine, muscular men in jeans and leather.

When John Embry passed away in 2010, the San Francisco Bay Area Reporter published an obituary that reflected the power and influence of Drummer. “For the first time, gay men across the country – particularly gay men in small-town America – saw masculine images of themselves and not the stereotypes presented in mainstream media. Through their encounter with Drummer, many gay men realized that there were others like themselves ‘out there.’ At the same time, the magazine high-lighted gay leather bars and businesses and gave those establishments a national venue."

Drummer began life as the newsletter of the Homophile Effort for Legal Protection (H.E.L.P.), a Los Angeles organization formed to counter the harassment of gay men by the Los Angeles Police Department. In the early 1970s, the L.A.P D. regularly conducted raids of gay bars, arresting the patrons and charging them with morals offenses. Names of those arrested were often published in local newspapers. Such publicity could destroy careers and lives. Victims of this harassment were often intimidated into settling the charges through payments of fines within a corrupt system of police, lawyers and the court system. H.E.L.P obtained sympathetic legal counsel for the men who had been arrested in the raids and gave gay men legal resources to contest these arrests. Both Embry and Larry Townsend, who would later write for Drummer magazine, were active in H.E.L.P., and Embry edited the organization’s newsletter called Drummer. In 1975, Embry and Jeanne C. Barney co-founded Drummer magazine. Barney was a professional journalist who wrote for many publications including The Advocate, another Los Angeles gay paper. In the change from Drummer, the H.E.L.P. newsletter, to Drummer, the leather magazine, Embry became publisher, and Barney became the first editor.

Apart from his involvement with H.E.L.P., Embry was increasingly a public figure in Los Angeles. He appeared at all kinds of activist events, often with bar owners, Reverend Troy Perry and others to raise funds and awareness regarding the previously almost unimagined possibility of not living with and dodging bias, harassment, legal corruption, blackmail, and so much worse.

As the publisher, John Embry was blessed with several brilliant editors who each contributed to the character of Drummer. However, Embry often took over the editorial duties under the pseudonym of Robert Payne, particularly when, as was often the case, the editorial succession was uneven or delayed, or, apparently, because he wanted to. Because the publication schedule was sketchy at best, the masthead all too occasional, and the months of publication often absent, it is difficult to get a complete sequence of who was supposed to be running the magazine at any given moment. Barney stayed through the first 11 issues, until the end of 1976. Robert Payne became the editor by issue 12, the first in 1977. With Drummer 19, later in 1977, Jack Fritscher began his tenure as editor. Fritscher edited 11 issues, Drummer 19-30. But by Drummer 31, in 1978, the ubiquitous Robert Payne had returned and John Rowberry was listed as “assignments editor.” Rowberry had an unusually lengthy association with the magazine, although in several capacities. He became the editor in 1981 but was promoted to associate publisher in 1982 when Robert Payne once again assumed editorial duties. Rowberry was associate publisher until 1985 and Payne continued as editor after Rowberry’s departure. Although others left their imprints on the magazine, Rowberry seems to have been, apart from Payne/Embry, the most durable editorial presence until the sale of the magazine in 1986.

The name Drummer is a reference to a quote from Walden by Henry David Thoreau, “If a man loses pace with his companions, perhaps it is because he hears a different drummer. Let him step to the music which he hears, however measured, or far away." This theme of breaking away is announced in the introduction to the magazine in Drummer Volume 1, Issue 1, with a statement to the readership about masculinity and muscle:

Ever search the newsstands or book stores for a magazine on the Leather Life? If so, you learned finally not to bother, there isn’t any.

There are plenty of Gay magazines, differing in viewpoint and illustration, and occasionally you will discover one with a lonely article of a model that turns you on. Such events are few and far between. Of course, at one time, the only thing available for a gay guy to turn on to were the weight lifter magazines.

Those times have changed and now so have the situations that limit coverage of our lifestyle to our giddier brothers.

On April 10, 1976, Drummer sponsored a charity event at the Mark IV Baths in Los Angeles that included a mock slave auction with Val Martin as the auctioneer. The L.A.P.D. conducted a theatrical, mediacentered raid that included a swarm of policemen, police cars, and helicopters. Embry and others were charged under an 1899 statute against trafficking in human slaves, a felony. The charges were eventually dropped. However, the continuing conflict with the L.A.P.D. lead Embry to move to San Francisco and relocate the magazine in 1977.

To those of us in the leather mode, the prospect of putting it together as a director, a producer, a cameraman or maybe especially a performer in a leather production is the stuff of which daydreams are made.

As part of a developing leather community, Drummer magazine created the Leather Fraternity. Upon getting a subscription to the magazine one became a member of the “fraternity,” the perks of which included a free personal ad in Drummer. The personal ads enabled leather men to connect with very specific partner and fantasy requests, requests that might not be made in a bar or bathhouse.

Drummer magazine’s Club section played an important part within the leather community in creating visibility of organizations available to those seeking like-minded individuals. The club listings, which Embry and his editors actively tried to make as comprehensive as possible, ranged from the earliest “motorcycle clubs” of Southern California, DC, and New York City, to the newest clubs formed that they were able to discover. In addition, the magazine published ads for leather bars and baths, informing subscribers in small towns and rural areas where they could find like-minded men when they arrived in the larger cities of Los Angeles, Chicago, San Francisco and New York.

Drummer magazine ceased publication with Issue 214 in April 1999. Issues of Drummer are still in circulation among collectors as well as treasured in private and public Archives. The Leather Archives & Museum in Chicago, Illinois has the entire collection of Drummer bound in its library. Issues of Drummer can still be purchased from collectors and dealers of rare and out of print periodicals.

Despite his increasing fame as a publisher and leatherman, Embry became a much less public figure until the 1990s when, to some extent, he re-emerged, still a hard-headed activist, but more fun-loving and funny than ever before.